As tradition on my blog I will make my guesses as how the main players on the Giants will end up doing. Never a perfect science this is just showing my love for my team. Last year I thought the Giants would make the playoffs as the wild card, they ended up winning the whole fucking thing. Amazing! (Here our my predictions from 2010) 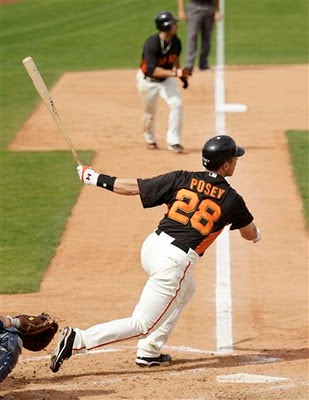 C-Buster Posey - Last season the Giants started out with Bengie Molina at catcher, I was hoping the Giants would call up Posey and when they finally did it changed the team for the better. Posey went on to get Rookie of the Year and most importantly helped the team win its first World Series title. Good job rookie, no matter what else you do you have succeeded. 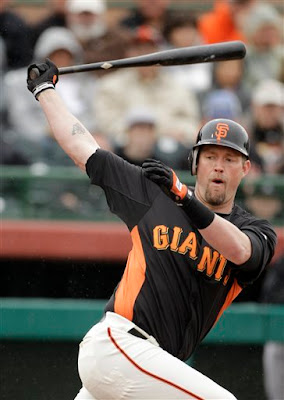 1B - Aubrey Huff - Huff had a great season last year, far exceeding anything I would think he could do. He adds veteran leadership and is a great club house guy. I was so happy he was on our team at that the Giants signed him for more years. I also think he is valuable since he can play in the OF, be on the lookout for Brandon Belt he could move Huff to the OF or be used if injures occur. 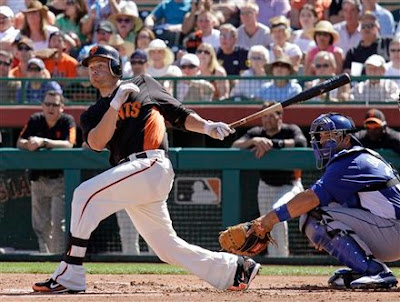 2B - Freddy Sanchez - Sanchez missed some of the season with various injuries but he was a vital part of the team with his glove and ability to get on base. He doesn't put up huge numbers be he is a guy you need on your team. 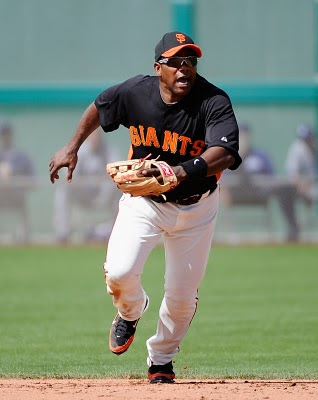 SS - Miguel Tejada - Last season Juan Uribe and Edgar Renteria split SS duties, both have gone on to different teams. The team decided to get a player with similar abilities and signed Tejada, who was having a great second half surge with the Padres. 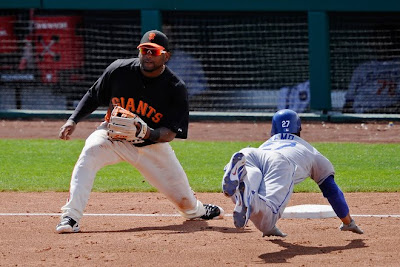 3B - Pablo Sandoval - Pablo was the Giants expected to have the best 2010 season, but he had problems with his swing as well as weight issues. He still put up not terrible numbers but I think the organization expected more. He has lost 40 lbs and looks to be back to his old self. 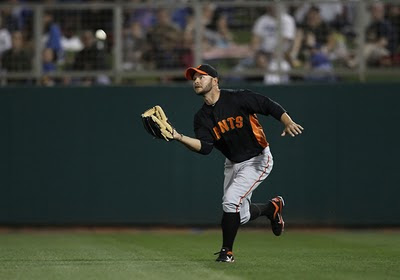 OF - Cody Ross - I was glad Giants got Ross, he can always hit and was a monster in the playoffs against the Phillies and Braves. He is all around good in everything but not exceptional. I think having him for an entire year will be helpful to the team. 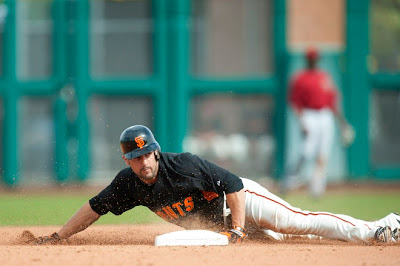 OF - Andres Torres - Last season Torres went from back up to full time starter and had an amazing season. It will be hard for him to repeat the success he had in 2010 but he is a hard worker and still has much left in those legs. 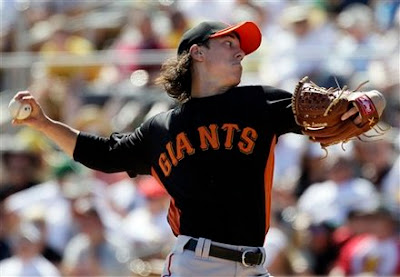 Tim Lincecum - Lincecum again proved to be the ace of the Giants, leading the team to a playoff spot. He had some struggles but was able to work his way out of them and was very hot going into the playoffs. I look for more of the same from the spunky ace. 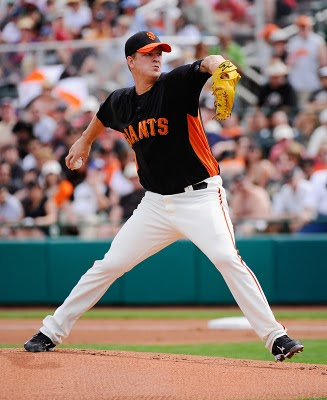 Matt Cain - Cain always puts up great numbers in most places but wins, he seems to have bad luck when it comes to that. Besides that Cain was an all-star and finally got the recognition he deserved. He was stellar in the playoffs, and his a great #2 starter. 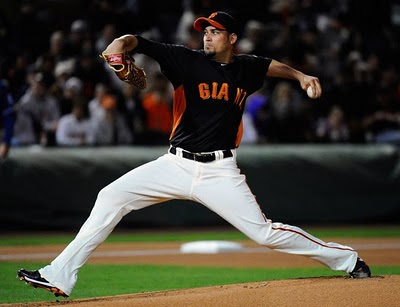 Jonathon Sanchez - Sanchez finally was able to control his stuff and a monster 2010 season for the Giants. Considering he is a number #3 starter he is very impressive. The only thing keeping Sanchez back is himself, he could be even better. 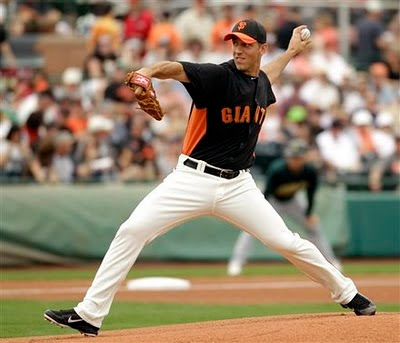 Madison Bumgarner - I was happy to Bumgarner get the call up and I had a feeling he would be good once called up, and the rookie hurler did not disappoint. He adds another arm to a rotation that is strong as is. Barry Zito - Say what you like about he overpaid veteran but at least he makes his starts. Zito has continues to be unspectacular in a Giants uniform. He showed early signs of life last season early on but it sort of faded away at the end. Still for a #5 they could do worse. 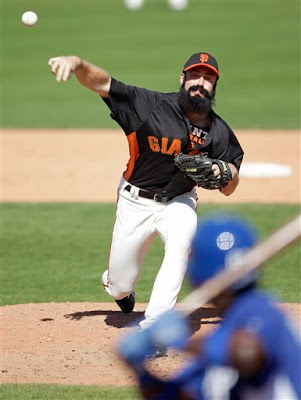 Bullpen - Brian Wilson became a dominant closer and household name in 2010, he is back along with Sergio Romo, Santiago Casilla, and Jeremy Affeldt. Late season additions Javier Lopez and Ramon Ramirez will now be with the team for a whole season. I feel the bullpen should be just as good as last season. 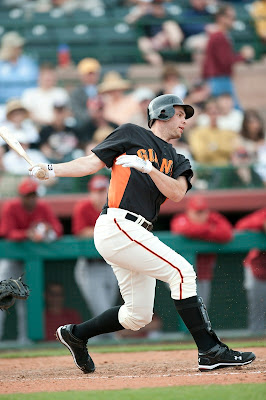 Bench - Giants are very deep this season on the bench. Big free agent signing Mark DeRosa is back and healthy, they have Pat Burell, Nate Schierholtz, and Aaron Rowand for back up OF's. Mike Fontenot can play almost all infield spots and Brandon Belt should get some at bats as a can't miss prospect. This team is made to keep going if someone goes out with an injury (which could easily happen on a veteran team).

OVERALL
The Giants continues to move forward from last season. They have some up and coming young players in Posey, Sandoval, Bumgarner, and Belt mixed with some nice veterans who far exceeded anything expected of them (Torres, Huff, Uribe). I cannot see them being worse off from last year with important additions playing full time. I think they will match last seasons record and make the playoffs. As far as repeating, well anything is possible!
Posted by Mummbles at 3:24 PM

Thanks, its nice to get a comment on it since last year I got none on my Giants blog.

Seems like it was just yesterday we were watching Cain in San Jose, now he is the real deal. I hope he gets that many and some cy young love.

I would like to see you do one of these for the A's!

Wesley was up to the challenge, to read his blog about the A's season please go here: http://blog.weshofmann.com/2011/03/2011-oakland-as.html

I think you missed the third outfielder. And is Brian Wilson still sporting that beard? I thought he'd change it up this year, like a Rollie Fingers' style handlebar mustache or something.

Hope this will be a good team for both bay area teams (I am sure the Giants will be good, but obviously I personally am hoping the A's are inspired by their success).

Colonel, I didn't list the third OF because its shaping up to be a platoon situation. Even if I said one guy over another I feel he wouldn't be playing the whole year anyway.

I think Mr. Wilson's beard has become too big for him to shave off for now, its kind of what he is known for. If he gets in a slump I wouldn't be shocked to see it shaved off though.